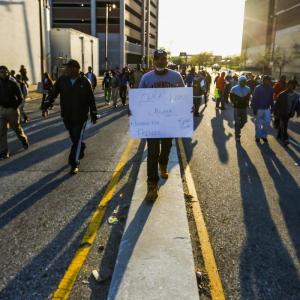 muggers got medieval on his ass

So, yeah, then this happened. Given the trivial availability of guns in Baltimore City, my guess this guy wasn't wielding a flail because he couldn't get a piece; it's interesting that the attacker apparently struck the intended victim and then made a demand that he turn over his phone.

According to a police report, the man said he was sitting in the grass in Patterson Park next to the baseball field on Thursday night at about 8 p.m. when four juveniles, about 14 to 16 years old, came up to him.

One of them was wielding a "ball and chain," and struck him in the face as the others stood by, the report says. The weapon is called a "mace" in the report but could also be referred to as a flail.

Baltimore activist James MacArthur is live-tweeting and webcasting his standoff with SWAT team over . He says he's being silenced for whistleblowing, and is broadcasting his phone conservation with police at his blog:

I don't know this guy from a hole in the ground; he may be a nutcase or he may be genuine. But its important to witness BCPD's actions. And it seems clear that the cops have escalated a simple warrant for failure to appear into a situation with potential for great violence. As an institution, the BCPD is not trustworthy.

If nothing else, listening to this is an amazing insight into a how a crisis situation goes.