Gun laws only disarm the disempowered 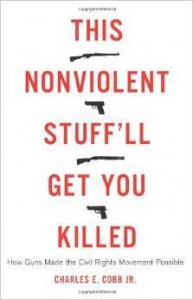 When you try to disarm the populace, you don't disarm the privileged; not only do they have state guns to call upon, they get themselves exempted from the prohibitions. (See, e.g., how Trump and Feinstein have CCW permits despite living in restrictive states.) And you don't disarm determined criminals; guns will never be harder to get than heroin is, and anyone with a couple of bucks and a willingness to break the law can get that.

You disarm those in need of protection, those who don't get police protection.

If you don't know about the key role guns played in the American struggle for civil rights, how black people engaged in justified armed self-defence against violent racists , you don't have an informed opinion about either gun rights or racial equality. You can fix that by reading Cobb's book.

And if you think that the need for citizens to have access to the means to resist violence -- either freelance violence or state violence -- ended with the 1960s, you're not well-acquainted with the world.

Armed self-defense (or, to use a term preferred by some, “armed resistance”) as part of black struggle began not in the 1960s with angry “militant” and “radical” young Afro-Americans, but in the earliest years of the United States as one of African people’s responses to oppression. This tradition, which culminates with the civil rights struggles and achievements of the mid-1960s, cannot be understood independently or outside its broader historical context. In every decade of the nation’s history, brave and determined black men and women picked up guns to defend themselves and their communities.

Thus the tradition of armed self-defense in Afro-American history cannot be disconnected from the successes of what today is called the nonviolent civil rights movement. Participants in that movement always saw themselves as part of a centuries-long history of black life and struggle. Guns in no way contradicted the lessons of that history. Indeed, the idea of nonviolent struggle was newer in the black community, and it was protected in many ways by gunfire and the threat of gunfire. Simply put: because nonviolence worked so well as a tactic for effecting change and was demonstrably improving their lives, some black people chose to use weapons to defend the nonviolent Freedom Movement. Although it is counterintuitive, any discussion of guns in the movement must therefore also include substantial discussion of nonviolence, and vice versa.

...As noted in 1964 by Robert P. “Bob” Moses, director of the Mississippi project of the Student Nonviolent Coordinating Committee (SNCC): “It’s not contradictory for a farmer to say he’s nonviolent and also pledge to shoot a marauder’s head off.” A story that Former SNCC chairman Stokely Carmichael liked to tell was of bringing an elderly woman to vote in Lowndes County Alabama — “she had to be 80 years old and going to vote for the first time in her life…. [T]hat ol’ lady came up to us, went into her bag, and produced this enormous, rusty Civil War-looking old pistol. ‘Best you hol’ this for me, son. I’ma go cast my vote now.’”