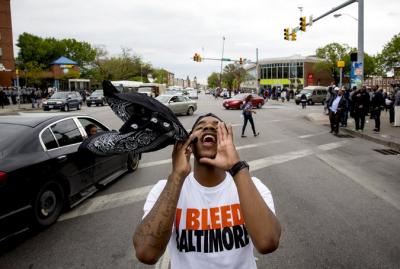 We recently linked to coverage of special treatment afforded to Georgia police accused of murder; Baltimore public defender (and candidate for judge) Todd Oppenheim has an NT op-ed about how the same idea is at work in the Freddie Gray murder trials:

The court has given extraordinary treatment to the accused officers, from their arrests up to their impending trials. But thousands of other defendants in Baltimore receive an inferior brand of justice. Northern Ireland's restrictive abortion laws are in breach of human rights by failing to provide exceptions in the case of fatal foetal abnormality and sexual crime, Belfast's High Court found in a landmark ruling on Monday.

Unlike other parts of the United Kingdom, abortion is banned in Northern Ireland unless the life or mental health of the mother is in danger...

Just as in the Republic of Ireland, where the law is as strict and debate as fierce, the restrictions have led to thousands of women a year travelling to Britain for abortions.

...Judge Mark Horner upheld a challenge by the Northern Ireland Human Rights Commission that the laws breached the European Convention on Human Rights and asked the parties involved to consider whether the ruling could be applied under current legislation.

If not, it would be referred to Northern Ireland's devolved assembly which to date has refused to extend legislation and whom the judge criticised, saying the issue was "unlikely to be grasped by the legislature in the foreseeable future".

Cory Doctorow: "security model that treats the computer's user as an attacker is doomed" The idea that we should treat ideas as property isn't just an abstract ontological confusion, it has very real consequences. As we become more reliant on computers, one of the most dangerous of those consequences is treating the owners of computers as attackers to be restricted, rather than users to be empowered.

I Can't Let You Do That, Dave (cacm.acm.org)

As ACM members doubtlessly appreciate, preventing the owner of a computer from executing the code of their choice is an impossible task. No matter how cleverly the operating system and its services monitor the user and hide the keys necessary to unlock files without permission, users will eventually find a flaw in the defenders' code and use it to jailbreak the system, allowing arbitrary code execution. Even if you stipulate that locking computer users out of their own computers is a legitimate objective, it is still a technological nonsense. A security model that treats the computer's user as an attacker is doomed. We cannot hide keys in devices we give to attackers for the same reason we cannot keep safes—no matter how well designed—in bank-robbers' living rooms.

The DMCA tries to address this by threatening people who publish code or information that would help remove a lock with severe penalties: five years in prison and $500,000 in fines for a first offense.

But information about flaws in a computer is not just useful to people who want to add functionality to their computers: it also provides opportunities for malware to seize control over the system. By criminalizing disclosure of flaws, the DMCA ensures systems covered by its measures become reservoirs of long-lived digital pathogens. A school that punishes students for "insensitive language" in making a political point (however stupid the point) does not get to claim it believes in freedom of speech.

A local high school cheerleading captain was disciplined after she sent out a tweet about illegal immigrants.

She says it was a political statement, not a racial one. FOX25 spoke with the teen who says she was taking a page from Donald Trump. [Ugh. -tms]...

"When only 10 percent of Revere votes for mayor cause the other 90 percent isn't legal," Godino said in the tweet.

She says it was a response to a tweet from her teacher about the low voter turnout for November's mayoral race. Caley says she meant her tweet as a political comment, not a racial one.

But after other students complained, the school stepped in. Revere Superintendent Dianne Kelly says the district believes in freedom of speech, but cannot support what she calls insensitive language.